An Interview with the Editors of Teachable Monuments

2020 saw unprecedented national attention directed toward memorials and monuments across the United States, as communities across the country grappled with the complex and controversial history imbued in many of these works. Right on time, PAD Co-Founder Harriet F. Senie and former PAD officers Jennifer Wingate and Sierra Rooney have edited a new anthology, Teachable Monuments: Using Public Art to Spark Dialogue and Confront Controversy, which comes out next month from Bloomsbury. In the spirit of encouraging the dialogue Teachable Monuments promotes, PAD asked the co-editors to share their motivations for the volume and their insights on the topics the book addresses.

JW: Anyone who asks a question about a monument makes a teachable monument. It’s hard for me think of an example of a monument that is not “teachable.” Researching US World War I commemorative sculpture taught me lot about what you can learn from monuments, but it took me much longer to figure out how to teach them effectively and engagingly.

HFS: Any monument is teachable because it embodies a history that is almost always more complex than is apparent. Since these works are literally in our midst they potentially engage a wide audience, that is to say if they look up from their cellphones. In any event, the subject works well in almost any educational setting or public program. The important elements to address are the circumstances of the commission, the context of the time in which it was erected, what particular qualities the work is intended to convey, and how we view it today. Most certainly there are other elements; each case is unique.

SR: As Harriet says, any monument can be teachable. All monuments are charged with public engagement possibilities; they just have to be activated as sites for critical inquiry. Artists, art historians, curators, educators, art administrators, activists, and really any community stakeholder have import roles to play in the pedagogical process. 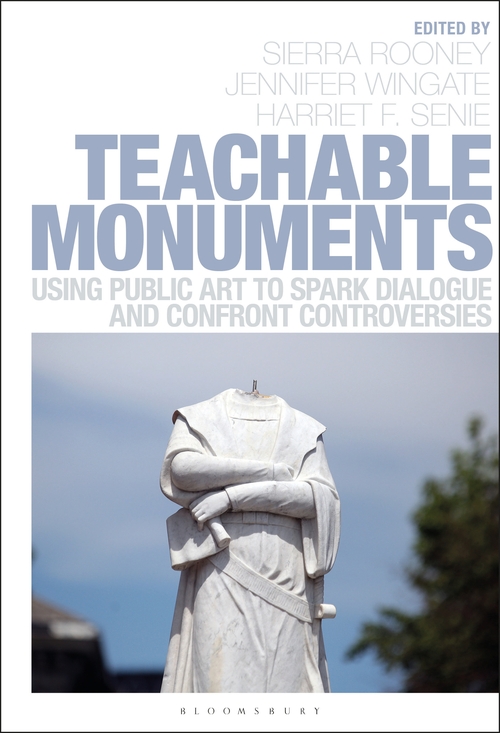 This book grew out of the 2018 panel Harriet and Sierra chaired at the Annual CAA Conference. Can you talk a bit about what prompted this idea and the discussions you were having around monuments in public space at that time?

HFS: The idea for teachable monuments came to me at a meeting of a NYC American Art reading group (led by Amy Werbel and Sylvia Yount) that gathers monthly to discuss new publications or exhibitions or other relevant topics. It typically meets at the CUNY Graduate Center, where I also teach, and it was during a presentation by Michele Bogart about the Barthé murals at Kingsborough Houses that someone mentioned a teachable moment. Somehow I translated that into teachable monument, an idea that seemed worth pursuing, especially at a time when these works were prompting so much controversy. It then made sense to expand the topic to a CAA conversation.

SR: At the time, we had been mulling over the sociopolitical siloing effect that the 2016 election of Donald Trump revealed and what we, as art historians and public art specialists, might do about it. We believed that we could use monuments to start conversations about civic issues and hopefully start to bridge some seemingly insurmountable gaps. This was just a few months before the events in Charlottesville, Virginia in August 2017. The debates that ensued in the months and years after made our project to engage monuments even more vital than we could have imagined.

How has your thinking on this issue shifted in the years since? And, in particular, since the widespread condemnation and removal of many works of public sculpture sparked by the BLM protests of Summer 2020?

JW: Now, more and more, the removals or the conversations around removals are the teachable moments. It’s important to keep the conversations going, because taking monuments down doesn’t solve the problems they embody. Also, another very significant topic is what and who will build new monuments and what are artists’ roles in these commissions? There have been some very sticky debates, notably regarding the Beyond Sims project for East Harlem) and now the plans for an abolitionist memorial in downtown Brooklyn. A lot of the age-old tensions between “art world” and “community” over figurative statues continue today in a big way.

HFS: It has become clear that the monuments we build in the future will have to be more inclusive to make visible those who have not been represented in our public spaces. The issue of removal is more complex and vexing. The best approach I have come across that helps begin the conversation is the question, “Is the reason you want to take it down the same as the reason it was put up?” If so, as is the case with Confederate memorials, they should probably be removed. But if not, then a more nuanced discussion is required. In general, I am not in favor of removal but prefer additional information, programs, possibly artworks, anything that keeps the conversation going and serves to continually (re)contextualize the work.

SR: We began working on the book the year after Charlottesville and finished in June 2020 as the BLM protests were taking place across the world, and monuments symbolizing oppression, racism, colonialism, and injustice were being vandalized, torn down, and in some extreme cases, thrown into rivers. Both events were major inflection points for our conception of the book, and greatly informed my own thinking. Vandalism of monuments reveals symbolic conflict over deeper issues, and ideally the symbolic spurs more substantial, systemic changes. Art can create a space for that important dialogue to begin, but like Jennifer and Harriet say, the challenge is how to keep the conversation going even after a monument is taken down. As a society, we have the tendency towards cultural amnesia, and hopefully some of the models discussed in Teachable Monuments will help combat that impulse to forget and move on. That said, I’m excited about what possibilities open up when we let go of the need for permanency in public art

What prompted the decision to move from a conference panel to a book? Who do you see as the audience for the book? How and in which contexts do you imagine it being used?

SR: We had such a tremendous interest after the session from people coming up to us with their own ideas and examples of teachable monuments, and it became clear there was so much more to explore.

HFS: The initial impetus was prompted by a request from the publisher. The potential audience includes students at higher levels of education, professionals (administrators and artists) working in the field, and a larger general audience that has become engaged with the issues it raises.

JW: Since more and more people are paying attention to monuments lately, I think the audience for this book has expanded beyond what we would have originally thought.

Would each of you name a work that you think exemplifies the benefits of the approach you advocate in Teachable Monuments, and why?

JW: Kenseth Armstead’s temporary project Washington 20/20/20 (2018) at the George Washington monument by Henry Kirke Brown in Union Square. Kenseth’s project revealed what the monument itself hides. That’s one of the major questions to ask when you want to make a monument teachable, because monuments only show a very small part of the story of whom they represent or commemorate. There’s an interview with Kenseth by Maria Carrascal in the volume.

HFS: Krzysztof Wodiczko’s projections manage to bring past monuments into the present. For example, his Bunker Hill Projection (1998) enables us to consider the history of this early monument to the American Revolution and how its meaning has been changed by evolving demographics, for example.

SR: These past few weeks I’ve been thinking a lot about Michele Cohen’s contribution to book. Michele is the Curator for the Architect of the US Capitol and her essay grapples with how to balance responsible stewardship with interpretation, by looking at two problematic artworks, Horatio Greenough’s Rescue (1850) and Luigi Persico’s Discovery (1844), both of which were removed from the U.S. Capitol’s East Front in 1958 for a number of reasons and have remained—pretty badly damaged—in storage ever since. Michele’s essay has become even more timely after the attack on the Capitol on January 6 of this year. As I’m sure many art historians were, I was struck by the art and architecture that served as the background for some of the horrifying images we saw from that day. In the specter of a mob espousing racist, anti-Semitic, and anti-democratic views, these artworks raise difficult questions: how do we reckon with some of the troubling imagery embedded in the Capitol and its relationship to the enduring legacy of racism, colonialism, and white supremacy that was on full view during the riot? Michele offers a solution of utilizing digital means to preserve and present problematic artworks with extensive contextual resources in ways that make them accessible and teachable without necessarily having them be on view within public space. It’s a compelling model—especially as so many museums and other cultural organizations are expanding their online programming—and one that I’d like to see realized.