“For the Pleasure of All Who Pass By”: Grand Conceptions, Conflict, and Collective Discontent on the Confederate Landscape 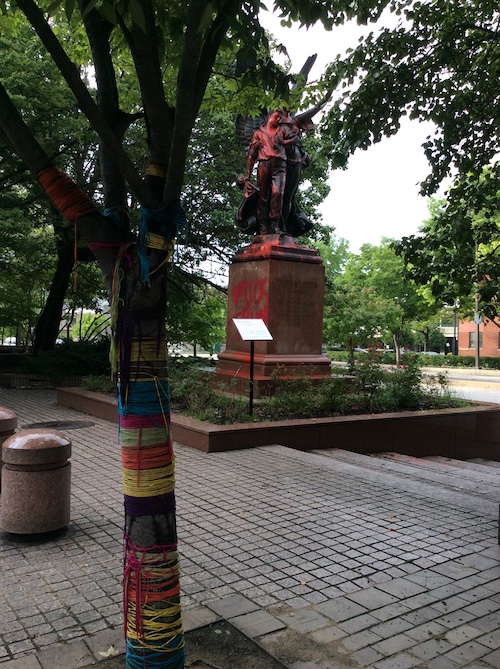 Frederick W. Ruckstuhl. Spirit of the Confederacy Monument, Baltimore. 1903. Photo credit: Evie Terrono. 2017.
Early in this century, yarn bombers undermined the authority of these monuments by putting leg warmers on the horses of Lee and Jackson in Baltimore, and providing the lone soldier commemorating the Richmond Howitzers with a knit scarf and a hat to keep him warm in the winter months. Escalating racist conflict in the last few years and broader social justice concerns have eroded the public’s complacency over these monuments, have focused attention on the politics of the actors of the Civil War and the contentious memories and commemorations of the conflict, and have generated ideological interventions in response to the Black Lives Matter movement. Graffiti on many of the monuments has exposed unresolved grievances, and although deemed as vandalism, it has revealed that for the first time, Americans are engaging consciously with the broad commemorative landscape, interrogating its iconography and currency, aiming all the while to foreground persistent racial injustices. The “whitewashing” of historical realities has literally been projected onto these monuments, as was evidenced in Phoenix, Arizona, where the Confederate monument was sprayed white and a white cross was painted at its base. Red paint was used repeatedly in the summer of 2017 to deface monuments across the country including Atlanta’s Peace Monument (1911) and the Confederate Soldiers and Sailors Monument in Baltimore, marking both the historical and current violence against African Americans. Media of mass communication have accelerated and popularized these and other alterations, have broadcast the vandalism, and have amplified private and public activism. Contemporary political and social discontent has prompted an ongoing discourse, not only about the dialectic potency of these monuments, but has also re-inscribed their erstwhile defunct aspirations and outmoded narratives into urgent deliberations about black marginality, oppression and victimization, racial conflict, but also racial solidarity.9 Mayoral commissions established to research the large-scale monuments in public spaces and decide their fate have generally excluded art historians, thus focusing primarily on the ideologies of those portrayed, with little concern over the specific circumstances of the monumental undertakings, the identity of their creators, their specific iconography, and their broader relationship to other contemporary cultural enterprises. The majority of the important Confederate monuments around the country have not been studied, they have not been photographed in detail, and the specifics of the surrounding urban geography has not been recorded. American art scholars have a unique opportunity here to situate these sculptures within the broader commemorative landscape, study the large archival record in order to decipher the possible ideological allegiances and motivations of their creators and the cultural and artistic relevance of these monuments, and articulate their historical rhetorical dynamics. As Patricia Phillips has remarked, public art can provide a “forum for investigation, articulation and constructive reappraisal,” that could be “amended by a multiplicity of philosophical, political, and civil issues.”10 Although public fora have provided platforms for communal input, decisions as to the fate of these monuments have been taken unilaterally, and often covertly. In the public record, art historians and historians alike are divided over the fate of these monuments, with competing arguments ranging from meaningful contextualization to sculptural or textual counter-narratives, while most often removal has dominated the conversation.11 Curiously, although the offending sculptures have been removed in Baltimore and elsewhere, the inscriptions on their massive pedestals which carry the most explicitly polemical narratives remain in-situ. Others have proposed that the monuments and the surrounding sites be left to the vagaries of environment and time, thus leading to their eventual physical and ideological degeneration, or that the bronze be melted and refashioned into monuments to African Americans, and at least one writer has proposed that citizens be invited to a mass iconoclastic ritual during which the bronze monuments are smashed into pieces, but be left in-situ as everlasting reminders of collective resistance to their oppressive narratives.12 Many who have called for removal advocate for museums, battlefields, and cemeteries to receive these monuments, and lastly proposals have surfaced about massive Confederate parks, where these statues will be displayed at eye level, thus compromising their supervisory authority. Already, in many cities, the contestation of these sites has energized both temporary counter-monuments and initiatives to correct and complement the historical landscape with monuments to the achievements of African Americans, as in the recently dedicated monument to entrepreneur and black activist Maggie Walker (2017) in Richmond, Virginia, but also the brutalization of African Americans and the prospective hope for conciliation in the much-anticipated Memorial to Peace and Justice in Montgomery, Alabama. 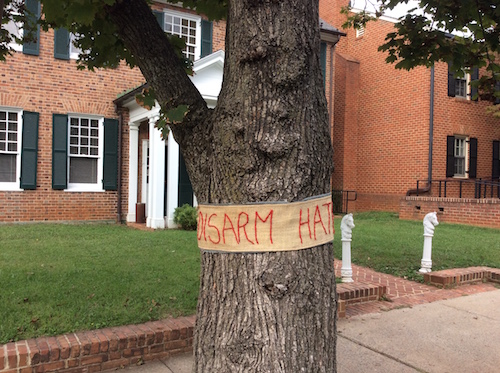 Justice Park, Charlottesville. September 10, 2017. Photo credit: Evie Terrono. 2017.
Historical memorial plaques affixed on the periphery of Justice Park (previously Jackson Park), the location of the Stonewall Jackson monument in Charlottesville, and more recent additions highlight the breadth and depth of the oppositional narratives. In 1921, Paul Goodloe McIntire, a major benefactor of the city who undertook an ambitious program of urban uplift in the context of the City Beautiful movement, purchased the site and dedicated the statue of Jackson to the city of his birth, expressing his aspiration that it would be “for the pleasure of all who pass by.” In 1972, a local civic league rededicated the park to Mary Frazier Cash, a local activist whose “leadership in community affairs and good government, her infinite tolerance and her hopes for protection of our heritage remain indelibly inspiring.” During my recent visit (Sept. 10, 2017), an embroidered band, wrapped around a tree on the perimeters of the park, read “Disarm Hate.” Herein lies the challenge of collectively satisfactory responses to our ongoing dilemmas over these commemorative spaces: these erstwhile sanctuaries of heritage and southern identity are now exposed as reminders of discrimination, injustice, and violence. Despite the liminality of their fate what is clearly evident is that many no longer derive pleasure from these fraught sites of memory. 1. “Pittsboro, Winnie Davis Chapter, No. 259,” United Daughters of the Confederacy, North Carolina Division. Minutes of the Twenty-Fifth Annual Convention of the United Daughters of the Confederacy North Carolina Division, Held at Winston-Salem, North Carolina, October 25, 26, 27, 1921 (Gastonia, N.C.: Brumley-Walters Printing Co.), 145. [Accessed September 20, 2017].↩ 2. “Monument Defaced,” Chatham Record, September 5, 1907.↩ 3. See Sarah Beethan, “From Spray Cans to Minivans: Contesting the Legacy of Confederate Soldier Monuments in the Era of ‘Black Lives Matter,’” Public Art Dialogue, 6, 1 (2016): 9-33.↩ 4. For an analysis of this perspective see, Evie Terrono, “Great Generals and Christian Soldiers: Commemorations of Robert E. Lee and Stonewall Jackson in the Civil Rights Era,” in Civil War in Art and Memory, Kirk Savage, Ed. in the National Gallery of Art Studies in the History of Art (Yale University Press, 2016), 147-170.↩ 5. Timothy Sedore, An illustrated Guide to Virginia’s Confederate Monuments (Carbondale: Southern Illinois University Press, 2011), 156.↩ 6. Theodore Tilton, Sonnets to the Memory of Frederick Douglass (Paris: Brentano’s, 1895).↩ 7. Grace E. Hale, “Granite Stopped Time: The Stone Mountain Memorial and the Representation of White Southern Identify,” The Georgia Historical Quarterly, 82, 1 (spring 1998): 30.↩ 8. “It’s Time to Remove the Confederate Memorial from Helena,” Great Falls Tribune, August 15, 2017. [accessed September 1. 2017].↩ 9. The expansiveness of the contestation that now includes other ideologically provocative monuments, among them those Marion Sims (1892, reinstalled 1934), and Theodore Roosevelt (1940) in New York City and the monuments to Sacagawea, Meriwether Lewis and William Clark (1919) in Charlottesville, has foregrounded for the public the identity of the historical American commemorative landscape that privileges dominant narratives to the exclusion of more nuanced perspectives.↩ 10. Patricia Phillips, “Temporality and Public Art,” in Critical Issues in Public Art, Harriett F. Senie and Sally Webster, eds. (New York: Harper Collins, 1992), 296-297.↩ 11. The public debates over the fate of these monuments are innumerable, see “Robin Pogrebin and Sopan Deb, “Trump Aside, Artists and Preservationists Debate the Rush to Topple Statues.” New York Times, August 18, 2017 [accessed August 20, 2017].↩ 12. Megan Kate Nelson, in “Empty Pedestals: What Should be Done with Civic monument to the Confederacy and its Leaders,” Civil War Times Magazine, October 2017 [accessed October 2017].↩
Fall 2017 | Volume 9, Issue 2
select another issue