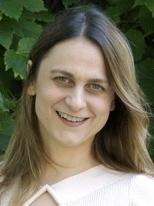 Kim Servart Theriault holds a Ph.D. in Art History from the University of Virginia and is Professor of Art History, Theory, and Criticism at Dominican University in River Forest, IL, where she focuses upon Modernist and Contemporary Art History, Criticism, and Culture.

Her book, Rethinking Arshile Gorky (Pennsylvania State University Press), was awarded a Society for the Preservation of American Modernists publication grant because it offers insights into the themes of displacement, trauma, and memory, as well as identifying issues of identity, originality, and mourning in Gorky’s work. She contributed the essay “Exile, Trauma, and Arshile Gorky’s The Artist and His Mother” to the Yale University Press catalog for Arshile Gorky: A Retrospective, an exhibition organized by the Philadelphia Museum of Art, which traveled to the Tate Modern and Los Angeles Museum of Contemporary Art.​​​​​​​

She has delivered lectures at the Library of Congress, National Gallery of Art in Washington, DC, Los Angeles Museum of Contemporary Art, the Gulbenkian Foundation in Lisbon, Portugal, and universities such as Oxford, University of London, the University of California in both Los Angeles and Berkeley, University of Michigan, and multiple College Art Association Annual conferences. She also writes reviews of contemporary art.

Currently she is focused on public art and memorials, which derives from research, presentations, and publications on the Vietnam Veterans Memorial in Washington, DC, such as “Go Away Little Girl: Gender, Race, and Controversy in the Vietnam Veterans Memorial” and “Re-membering Vietnam: War, Trauma and ‘Scarring Over’ After “The Wall.” She is completing her second book, The Vietnam Veterans Memorial and its Infusion into American Culture, Conscience, and Consciousness which addresses the subjects of myth, memory, and trauma. In 2016, she chaired a College Art Association Annual Conference session in Washington, DC, entitled, “Reconsidering the Wall: The Vietnam Veterans Memorial Thirty-Five Years Later.” That summer she received the honor of being included in the National Endowment for the Humanities Summer Seminar for College Teachers “Veterans in Society: Ambiguities and Representations.” Expanding her interest in public art and memorialization, she presented, “The American Veterans Disabled for Life Memorial in the Aesthetics and Tradition of Memorial-Making” at the Popular Culture/American Culture Association Annual Conference in 2017.