Welcome to Chicago, PAD Members! When asked by visitors to my beloved city what to go see, I usually betray my art historical inclinations and suggest something related to architecture. Chicago is, after all, an architecture city par excellence, and with so much Gang, Goldberg, Mies, Sullivan, et al. to choose from, art sometimes seems an afterthought. For those of you willing to contend with our lovely winter weather and leave the confines of the conference hotel, however, there are plenty of public artworks and projects worth the effort.

Due to said weather, I am going to keep my recommendations limited to the downtown area (“the Loop”), all within an easily walkable route from the conference hotel—with the caveat that Chicago is also a neighborhood city par excellence that rewards visitors who venture outward to its north, south, and west sides. For example, the Pilsen neighborhood is famous for its murals clustered around 16th and 18th Streets.

A significant cluster of murals can also be found just one block west of the Chicago Hilton, along S. Wabash Ave. Founded in 2013 by Columbia College Chicago, the Wabash Arts Corridor (WAC) is a vibrant, ever-changing program of large-scale outdoor contemporary art. WAC is now one of the largest street art and public art collections of women artists and artists of color.

Walking two blocks west of Wabash will get you to S. Dearborn Street, where you can—in very quick succession—encounter some of the most notable examples of public art from the postwar period in the United States. Alexander Calder’s Flamingo (1974) enlivens Mies van der Rohe’s Federal Plaza; also make sure to seek out Sol LeWitt’s subtle Lines in Four Directions (1985) directly across the street, barely perceptible behind the glass-walled entrance and security fences of the US District Court Building at 10 W. Jackson Boulevard. 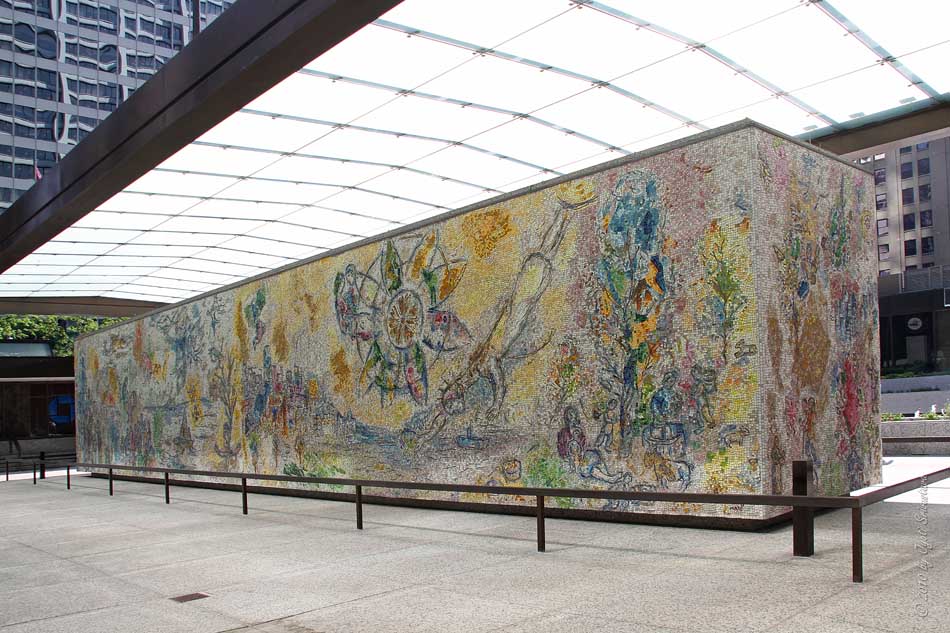 At W. Monroe Street, another striking pair of commissioned works flank the east and west sides of Dearborn: Marc Chagall’s Four Seasons (1974), under a bespoke pavilion designed by Skidmore, Owings & Merrill (SOM) in the Chase Bank Plaza; and Richard Lippold’s Radiant I (1957) created for the lobby of the iconic Inland Steel Building, also designed by SOM. Security staff are accustomed to people stopping in to see the art in the lobby, which also includes Anish Kapoor’s Blood Mirror (2000), though Lippold’s piece is also visible from the street.

Three more blocks north on Dearborn at Richard J. Daley Plaza is Pablo Picasso’s untitled monumental sculpture (colloquially known as “The Picasso” or the “Chicago Picasso”), which put Chicago on the public art “map” in 1967. Two other notable, if less-successful pieces, include Joan Miro’s ill-sited Miro’s Chicago (1981) and Jean Dubuffet’s neglected Monument with Standing Beast (1984)—can be found around the south and north borders of Daley Plaza, on W. Washington Street and W. Randolph Street, respectively.

Heading east on Randolph, make sure to catch Kerry James Marshall’s massive Rush More (2018), a mural honoring twenty notable Chicago women that is painted on the back side of the Chicago Cultural Center, accessible via N. Garland Court. A little more out of the way are six tonals, or sounding sculptures, from an original 11-piece commission created by Harry Bertoia for the plaza Standard Oil Building (now the Aon Center) in 1974, still making sound as they move in the wind.

Finally, no exploration of public art in Chicago would be complete without a stop at Millennium Park, just on the other side of Randolph. While now iconic, even perhaps clichéd, Anish Kapoor’s Cloud Gate (“The Bean,” 2004-2006) and Jaume Plensa’s Crown Fountain (2004) continue to justify their popularity. New, temporary commissions from Chicago-based artists Edra Soto and Christine Tarkowski are also currently on view.